The home to DCTP Forum Mafia as well as any other type of random forum game that you can conjure up.
Post Reply
48 posts

Where be my DBOs at?!

I highly suggest killing Kamite, the facilitator of Fuji's death.

Link, I'm totally one of those DBOs! Please don't kill me!

or was it Sakamoto Takuma-kun?

Miyano stood there, lost in her thoughts for a long time, her shadow growing as the light dimmed. Where should she start? Miyano looked around at the empty street. She didn’t want to go inside the house, she knew she’d get in trouble if someone saw her. But where else should she start then? Not like just standing around was going to get Fujiwara justice.

Miyano walked cautiously around the blood to the front door– only there was any door anymore. She managed to get past the police tape rather easily, and, still avoiding the blood spatter, made her way inside Fuji’s home.

She wasn’t sure whether she should turn the lights on, or if they even worked, but realized soon that not being able to see anything would make this whole thing pointless. She should’ve brought a flashlight with her, but it was too late to regret it now. Miyano flipped the lights on. The place looked just like she remembered it from her various visits. Well, except the houseplant that had
fallen over and covered most of the floor. Miyano took a step towards it – given that most of the blood was outside, it had been all but confirmed that Fujiwara had been attacked while she was at the door. Whether she was going in or out wasn’t known. Had Fuji broken the pot before, or had someone destroyed it while in her house? Miyano reminded herself that the police had found no fingerprints.

The living room held no answers. Neither did the kitchen, though Miyano did notice that one of the knives was missing. Nothing new there, she supposed and headed for upstairs. She didn’t linger long at the guest room, there was hardly anything there. Fujiwara’s bedroom, however, was a mess. The drawers were open, the bedsheets and pillows thrown on to the floor. Miyano also noticed that there was a small hole in the window. She looked around a bit, but failed to find anything interesting – if there had been something, it was taken. She sighed and left the room.

This was starting to feel more and more like huge waste of time. Maybe she would have been better off talking to the others. Miyano slipped past the tape once more, quickly running to nearby bushes. They were suspiciously empty today, devoid of the usual suspect. Miyano could only assume he was somewhere playing pokemon.

After waiting a while and still seeing no movement, Miyano left the bushes and started walking briskly towards her own house. She planned to call all her friends in town one after the another and ask them some questions. Her hopes were not high after she had failed to find anything in the scene itself, but, just maybe, some of the stuff they would tell her would be helpful. She briefly pondered if it would be better to just leave things to the cops, but… she was too angry. She had managed to keep it in check for most of the day by directing it towards the culprit, and she wanted to be the one to find and end them. With that thought driving her forward, she picked the first number.

I'm on top clearly, giving a thumbs up in both gifs
Top

Re: Forum Mafia 78.8: Miyano_Shiho’s Quest on Revenge for Fujiwara (Night 1)

Miyano sighed after finishing the last call. She had only been able to catch few people, and they hadn’t been very helpful. It almost made her feel like she wasn’t trusted. Miyano decided the best course of action now would be try to catch the ones who hadn’t answered her in person.
As soon as she opened her door, however, she realized that her plans would have to wait. Kamite was standing in front of her, hand raised as if ready to knock. He seemed clearly agitated and when prompted, told her that a Finnish was missing, and there was blood. ”The mayor has ordered us all to meet at HYPE park in an hour. He wants to talk.” Kamite moved aside to let Miyano past him. ”I’ve been going around gathering people.”


That couldn’t be good, Miyano thought as she followed Kamite after locking her door. They headed silently down the road. ”Oh, you don’t have to follow me, I’m still going to get more people,” Kamite told her after noticing she was following him. ”I see.” Miyano answered after they reached crossroads. ”I’ll go into the park already then,” she continued and headed left. Kamite went the other direction, towards Nomemory’s house, waving goodbyes.

The park wasn’t far from her house – in fact it wasn’t far from any house in the town. Miyano wasn’t sure how it was even possible, but she had long ago given up on thinking about that. And right now there were more pressing things to wonder. Maybe the mayor had news about Fuji. Maybe she had been found alive somewhere, maybe her kidnapper had been caught, maybe, maybe, maybe…
Shiver went up in Miyano’s spine when she saw the mayor. They were already there in the park, chatting to couple police officers, and by their grim looks, what was been talked about was anything but good. Her hopes crashing down, she put on a what she hoped wasn’t utterly depressed look, and waved at the mayor. Noticing her, they waved back, but didn’t call her over.
They probably don’t want me bothering them right now, Miyano thought and sat down at nearby bench, watching the park slowly starting to fill with more people. She saw Kamite go to them and whisper something. The mayor nodded and took a microphone next to them. Everyone who saw that went quiet. Miyano stood up and moved closer. Whatever this was, she wanted to hear it clearly.
”Today, I have very grave news for all of you. Our friend, Memesu (Shiratori), has disappeared. It is not very likely they will be found alive at this point. Moreover, the I’m told the scene is a lot like...What happened before.” The mayor gulped before continuing, ”...But in this case there is something else. You see, the roads in and out town all have police guarding them, have been since the årevious incident, in fact. Nobody has passed them since that either.”
Miyano looked around. Most people looked perplexed, but some, just like her, seemed to have realized what the mayor’s words meant.
”I repeat”, the mayor continued, ”Nobody has left this town since after Fujiwara’s disappearance. Nobody has come in either. I’m forced to conclude...that one of us, one of the citizens of this town...is a murderer.”

Memesu (Shiratori) has been killed.

Their will
Spoiler: Will
Suck it, other movie cops.
DCTP Movie Night: TBA

I was made to fail.


MoonRaven wrote:I was made to fail.

I was failed. :gomera:
Top

There's clearly magic involved in these mysterious disappearances, it must be the work of the evil witch Gruntilda that makes people disappear like this. No other way to explain it. Let's all look for puzzle pieces to solve this together and justice restored in our village, and if anyone has found out anything don't hesitate to talk with me, Banjo, here or in the privacy of my home if you prefer anonymity.

Also, if there are more cops around, please talk with me.
Top

Day 1 Ends
Miyano felt dizzy. The accusations had started faster than she had thought possible, with Link claiming they saw MoonRaven sneaking around, to Abs demanding PhoenixTears explain their whereabouts or else… She tried to make sense of things and yelled everyone to calm down. Some people near her listened, but most kept on blaming others or declaiming their own innocence. The mayor had left after that dramatic announcement, escorted by the police. They could have at least helped calm everyone down, Miyano thought bitterly, before turning to Henry Gordan and Banjo, who looked at her with expectation. She didn’t know what to say to them, not really, but she felt she needed allies. So Miyano smiled at them and beckoned them to follow. ”It’s impossible to hear anything in here!” she yelled to be heard when the two looked at her with suspicion in their eyes. Miyano hoped she wouldn’t regret this.

They stopped at the park entrance. The shouting from the park could still be heard clearly enough, but at least in here Miyano didn’t need to compete with it. ”What do you think?” she asked the pair. They didn’t answer, still focused on the yelling coming from behind them.

Miyano coughed after waiting a bit, and the two jumped, apparently having forgotten she was there. She almost giggled, but managed to stop herself in time. ”What do we think of what?” Abs asked after calming down. ”About the mayor’s news.” Miyano answered. ”I don’t know. I don’t want to suspect anyone in the town.” Abs said, PhoenixTears nodding alongside them. Miyano felt annoyed. It was not like she wanted to suspect anyone either, but that wouldn’t solve this.

The yells coming from the park had started to unify. Miyano felt shiver go down her spine. How had things escalated to that point? She realized her mistake of leaving the park and rushed past PhoenixTears and Abs, not caring whether they followed her or not. She had to calm them group in the park down, before something horrible happened again.

Tied Votes. Nobody was lynched.

An officer has been suspended

An officer has been suspended

That's right. Banjo & KazooieKaFuji gets a vote each.

Complete Day 1 vote-split: for those of us still using the forum thread 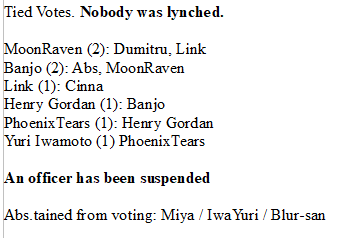