My Theory On The Relationship Between Gin and Sherry

Forum reserved for discussing specific points of the story—mostly from the manga. Be warned, these discussions will be current with the manga and will spoil many plot lines for anime-centric fans.
Post Reply
25 posts

that is interesting, Chek. So Sherry rejected him and he rejected Vermouth because he liked Sherry. Since Gin seems to like the young ones, I wonder how old is he?
On her part Vermouth was angry because Gin rejected her even though she has a great body(Gin knows she is much older than she looks - like Tsunade from Naruto)

whatever Gin's and Sherry's relation was, I hope we get more hints
Top

mihai wrote:that is interesting, Chek. So Sherry rejected him and he rejected Vermouth because he liked Sherry. Since Gin seems to like the young ones, I wonder how old is he?
On her part Vermouth was angry because Gin rejected her even though she has a great body(Gin knows she is much older than she looks - like Tsunade from Naruto)

whatever Gin's and Sherry's relation was, I hope we get more hints

I don't think its more about who rejecting whom. going back to the 1 billion yen bank robbery case I noticed Gin saying to Akemi that 'her sister, unlike she, is indispensable to the organisation' could this mean that the organisation/gin have been trying to track down sherry inorder to bring her back to the organisation, not to kill her. For example, the scene on the rooftop could support this being that eventhough gin had a chance to kill sherry with one shot he didn't because he wanted her to suffer first for betraying the organisation before he brings her back. Whereas, Vermouth acted on her own to kill Sherry without the boss's awareness supporting chek's theory about her being against the development of the APTX 4869 therefore wouldn't want sherry brought back to continue the research for the drug.
Top

Roguish Charm
I only watch Anime so No spoilers please
Posts: 151 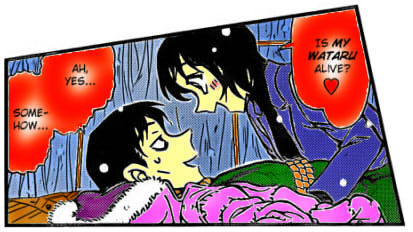 It is true that Gosho has given us a lot of hints to think about a sexual relationship between Gin and Shiho.
It seems to be true that whatever was that relationship, shiho ended up with feelings of hatred and fear, while Gin developed an obsession towards Sherry that can't be really explained.

Now, as someone said before, the fear of Shiho is towards every BO member, even Akai.. The hatred is probably a result of Gin Killing her sister, wich was her only family..
And the obsession of Gin with her is rather a natural behavior for him.. He treats Akai as his arch-enemy, even though they didn't even meet before the current timeline. He seems to want to find and kill the people who betrayed the BO, but you could also say that he hates, and obsesses about the people that tricked or fooled him in some way.. just like when he looked for conan inside the locker box, or when he attacked Vermouth with an ice-pick..

But the fact remains.. there was a personal relationship between Shiho and him, and in my opinion it doesn't matter what kind of relationship, but rather, how did it begin..

What I think is that If Gosho is ever gonna reveal the kind of relationship they shared, he must start from the begining of it. In other words, under what circumstances would Gin end up meeting Sherry?
Assuming that love at first sight is out of character for both of them, I thought of two possible scenarios:

1- Sherry went to study overseas when she was litte, after her parents died. As we know, Akemi stayed in Japan living a normal life, wich means that someone else had to go with her, since a child would not be allowed to fly alone, let alone enter another country and attend school or rent an apartment.. Even if moving some contacts the BO managed to do that, they would want someone to protect her, and check on her.. (since she probably was one of their brightest prospects) This protection isn't in an older brother kind of way, but rather a "merchant looking out for his goods" way.
I think this could have been one of Gin's first important tasks, and it would explain why he knows Sherry so well..
On the other hand, this wouldn't explain the sexual implications.

2- Sherry was around 18 years old before she escaped, it would be a problem for the BO if one of their most valuable scientist started going out with someone from the outside.. There is no way to prevent this kind of development, since it is part of human nature. Anticipating this, the BO set up an arranged marriage or some kind of equivalent deal between Sherry and a loyal member such as Gin.
That would explain the sexual implications and how did they meet.

I think it could be a combination of 1 and 2, or just 2 alone.. The important thing is that the order had to come for above, or else it would be too human for Gin to start a relationship with someone.. specially since he has never (in almost 900 chapters) showed any kind of emotion (except for anger).
Top

@dcfan, to add to your timeline, Shiho was already working on the project by at least the the age of thirteen, so it makes sense if she had finished US school early (being a prodigy and all) and returned to Japan. We know she was at least thirteen because Akai started infiltrating the BO 5 years ago, and he tried to get in by dating Akemi because of her ties with Shiho who was a high ranking scientist already...

Second, Shiho had been on at least one mission with Gin since the Mermaid guestbook issue seems to have switched to confirmed, and Gosho mentioned putting an alias for Gin next to Vodka's name (which was cut off in the panel)...
Top

Thanks Check, that would confirm that Shiho was really a kid when she went to america, and be it Gin or not, she had to be escorted by someone..

About the Mermaid guestbook issue, It slipped through my mind..
Unfortunatly, we don't know when or why did it happen, nor if that was their only mission together..

but following the same line of thought: "Wherever Shiho goes, she will need some kind of protection" It would really put Gin as the person responsible for Shiho's wellbeing (as I said before, not because he cares about her, but because she is valuable to the BO). Now, there is just one step from that relationship to the one I described in #2..
Top

fredinalnumber wrote:I'm not sure about the "imagining her naked" part. I didn't take it seriously because I just thought that Gosho simply decided to draw her that way.

When it comes to one character thinking about another character, it's true some manga artists draw characters naked as a sign of someone having intimate knowledge of another (or fanservice). BUT, Gosho usually only draws characters naked in people's thoughts for... appropriate reasons.
7-9 cover image: Ran imagines Shinichi having sex with a blond women because she thinks Shinichi is cheating (them nude together are depicted several times in this case)
16-9 Conan thinks of Ran naked because he thinks Kaitou Kid stole her clothes
24-2 pg 10: Shiratori thinks of a tied up Sato with her her clothes in tatters because he is worried the culprit is planning to "ravage" her.
46-11 pg 7: Ran imagines Shinichi naked in bed with a naked blond women (they are depicted at least one more time in this case)
55-10 pg 10: Ran imagines Eri naked with the man she is "committing adultery" with.
?-?: Conan thinks about Ran naked because she is/or asks about taking a bath with him. (several files I think)
?-?: Conan thinks about the naked victim because he was in a bath.
?-?: Takagi thinks of Sato nude during a fantasy of them being together (Situation is Shiratori wanted to marry Sato?)
?-?: Agasa accuses Conan of trying to walk in on Haibara in the bath, and Haibara is shown bathing.

78-7: Gin thinks of Vermouth with her clothes on (even though they have been intimate), in contrast to Sherry. Keep in mind Vermouth is one of the most likely characters to be drawn without clothes in any context (not just people's thoughts).

The implication of this is that Gin has an ... appropriate reason ... for thinking of Shiho naked repeatedly.

The only real exceptions to this rule are shadow people, which don't really count.

I think it's romantic relationship with Gin
" memories of someone who's passed away remain beautiful forever and a person's heart will linger , over they , they say "
Top

'I think' if there's any relationship between them before, it would be Gin having a psychopathic obsession about Haibara which made her terribly scared of him. More like predator-prey obsession. Love her, torment and kill her.

This may explain why Akai called him 'Koibito-san' (Mr Boyfriend), not because he is Haibara's lover but her stalker/tormentor. Remember the part when Haibara was reminded of Dai/Akai saying the word "Don't make that kind of face. I will protect you." in the past? At that time, Akemi was still well and alive, while Dai/Akai's undercover was still safe. The only reason will be Haibara was already scared of someone during her time in BO.
Top

Aist wrote:This may explain why Akai called him 'Koibito-san' (Mr Boyfriend), not because he is Haibara's lover but her stalker/tormentor. Remember the part when Haibara was reminded of Dai/Akai saying the word "Don't make that kind of face. I will protect you." in the past? At that time, Akemi was still well and alive, while Dai/Akai's undercover was still safe. The only reason will be Haibara was already scared of someone during her time in BO.

I don't see how "Koibito" translates to "stalker/tormentor".

It's "I will protect her" (referring to Akemi), to reassure Shiho that her sister is in good care.
DC's Awesome Qoutes:
Spoiler: Shinichi Kudo:''following the smell of blood to arrive upon a crime scene, using every one of your senses to hunt the culprit, then once you've seized hold of him, sinking your sharp teeth(your evidence) until your opponent gives up the ghost, That's a detective''
DeviantArt:http://meitanteixx.deviantart.com/
Tumblr:http://masterdetectivexx.tumblr.com/
Youtube:https://www.youtube.com/channel/UCFL6Gq ... hWaNIRUu0Q
Top
Post Reply
25 posts