Forum reserved for discussing specific points of the story—mostly from the manga. Be warned, these discussions will be current with the manga and will spoil many plot lines for anime-centric fans.
Post Reply
12 posts • Page 1 of 1

First spoiler pics are out.

Some say it is Okino Yoko
Top

Why is no one talking about the spoiler pics? ...*wondering*
Top

you missed kogoro lol.
we saw him last time along with wakita in nagano .
its been more than 1 year
Top

So it is Okino Yoko.
Top

well full raw scans are now released on the web so search it yourself...
apparantly it's another "closed room murder" that happened in a creepy mansion with rumor talk about a stalking phantom...

this... could be a case with another false flag like the previous one right? 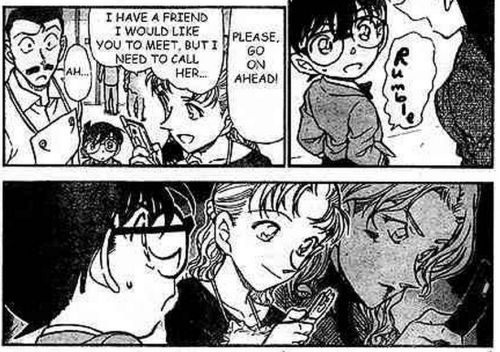 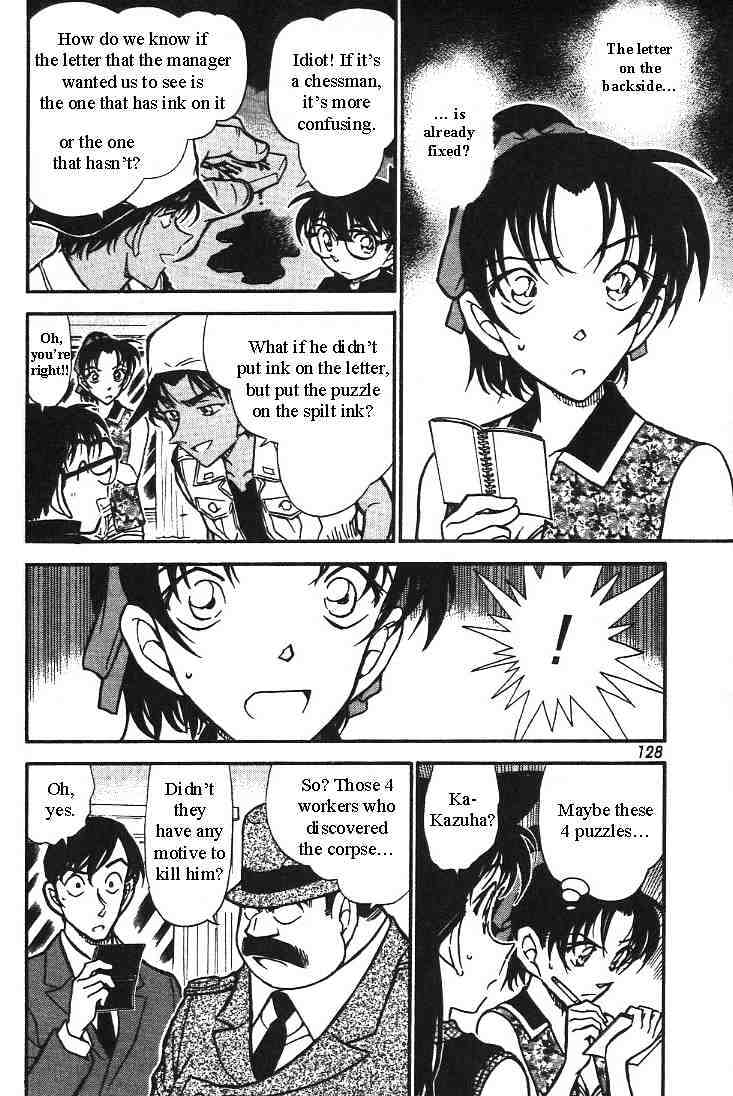 Or simply Wakita is the link between Gin and Mary.
Top

maybe it's too quick to jump to conclusions, but this opening case eerily reminded me of the case 762 - 764 (watchman of time) where the murder weapon involved the clock mechanism... not to mention how the three different descriptions about the culprit: an agile man, a fat man, someone wearing a lady dress... ended up being the description of the murder weapon: the umbrella! 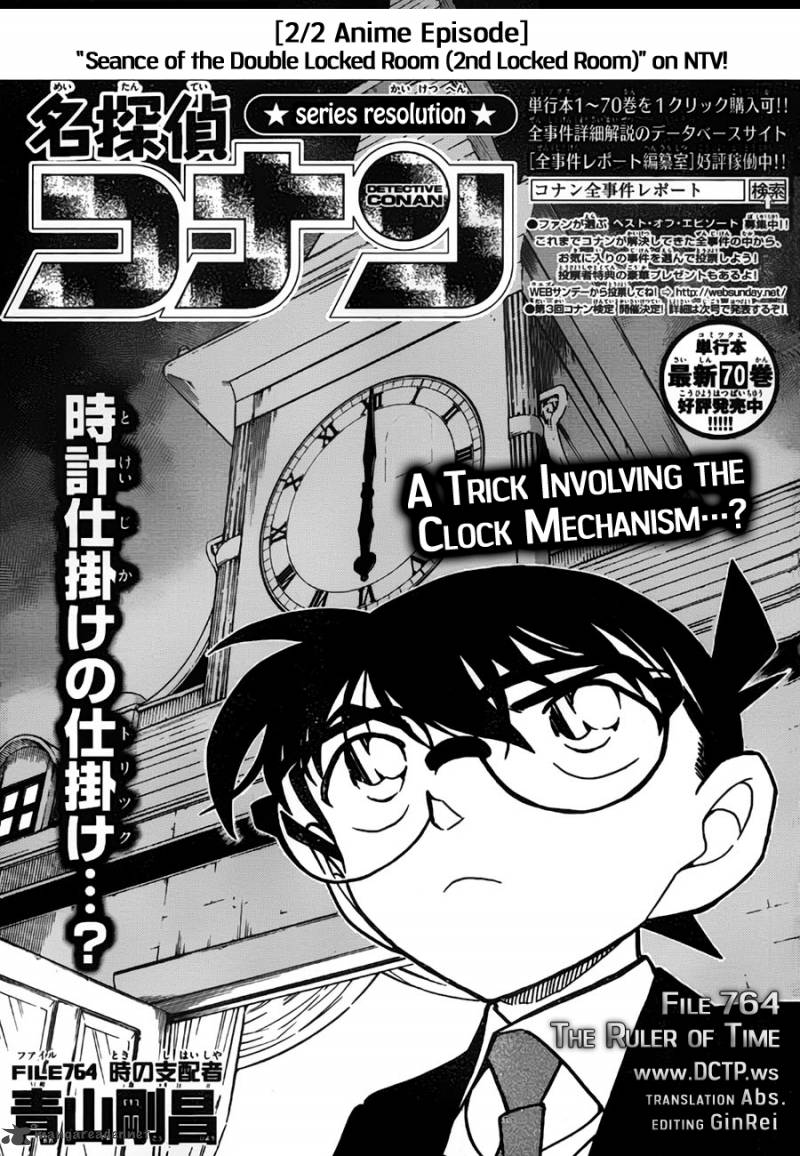 did anybody notice that wakita is only interested about cases in nangano.
it seems he always listens the description of cases of mouri.
but only two times( including this in karuizawa,nagano)
he desires to come to the crime scene.
both in nagano.
meet somebody there. now for pretext of meeting this
somebody, he is spying mouri, private detective.
which obviuosly tells that somebody is in police
department nagano.
koumei seems best fitting as he is related to bo somehow.
another one could be kuroda.
wakita is searching someone means
that someone he's searching isnt in contact with wakita
currently.
so if this person is kuroda, it makes sense for wakita
to not know kuroda is transferred somewhwere else
since their contact is broken.

another important thing about nagano is that
karasuma renya mansion is in nagano.

nagano is definitely very important to plot.
and I am expecting something interesting to happen in this case.
something which was built in nagano snowy mountains
case.
really excited
Top In this manga panel here there is 26 cards on a panel and it was sent by the victim to Fuugo before he died and this cipher was already solved couple of days ago and credit goes to the owner of kuromaku website where his analysis is on the link below
https://conan-kuromaku.info/netabare/1055wa-kousatsu
So basically to solve the code there is a couple of cards which is heart, diamond, spade and club so if there is a heart 1 card, then it the first letter of "Heart" so it H, and it goes on until you solve the 26 cards, so the cipher is "Help me, attic the culprit is Himi" which is solved by the owner of Kuromaku website, so if the code was the dying message by the victim then the killer is Fuugo wife which is Baba Himi.
But i think that the code was not made by the victim rather by the real killer, here my reasoning :
1. Isnt it easier for the victim to write the killer name with his own blood rather than doing it with 26 cards why the victim bother trying to use a harder way to make the dying message?
2. If the victim had the chance to send the 26 card picture to Fuugo it meant that he has a chance to just text his younger brother the killer name but he didnt why?
All those two point, make me speculate that there a high chance the dying message was actually made by the real killer, and if it was made by the real killer then the killer is either Fuugo or Heijima not Himi because it weird for the real killer to made a dying message that has the anagram of her name.

And this manga panel show that there is another mystery which other than the 26 cards code is how the murderer lock the victim in the attic, this one is the harder mystery in my opinion and im still not sure how the real killer manage to lock Nukiyasu would love to hear your speculation on this mystery, maybe the killer shot Nukiyasu and let him goes to the attic by himself and letting him die there.

Note : if the photo imgur of the manga panel in my reply isnt showed up please tell me.
Top

Dying messages often need to be done in a method where the killer can't come back and destroy them, at least. If the message is done in a normal way that's simple to understand or just basic writing, that's when the culprit might've most likely manipulated the message or even created it.
My blog: https://stemfromashes.blogspot.com/

k11chi wrote: ↑
Yesterday, 10:58 am
Dying messages often need to be done in a method where the killer can't come back and destroy them, at least. If the message is done in a normal way that's simple to understand or just basic writing, that's when the culprit might've most likely manipulated the message or even created it.