Forum reserved for discussing specific points of the story—mostly from the manga. Be warned, these discussions will be current with the manga and will spoil many plot lines for anime-centric fans.
Post Reply
289 posts 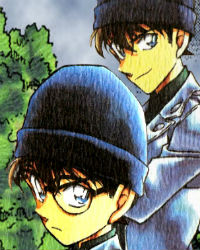 k11chi wrote:Chapter 1000 will probably be Gin's last arc as he was there since chapter 1 but in-story he's not so important of a member that he'd stay around for the finale I'd imagine.

I don't think so that in just 25 files more, Rum will be identified and gin will be killed. It feels way to much pacey AF the story is being finished just for the sake of it and gosho won't do that as long as Conan is filling his stomach.
Top

You're kidding, right? It's Gin.

Without him, there'd be no Detective Conan, to begin with... and that's just the start of it.

Tantei San wrote:
Spoiler:
Though You say that Any person with detective intelligence will be RUM .! Aint it! .! So that means there could be any one in the Police Department(Not Only Kuroda) as all are big detectives.

No police characters except Kansuke, Taka'aki/Koumei, Hyoue, and Rei/Toru/Bourbon, are really on Shinichi's/Conan's level. I'm talking about characters with that level of intelligence.

Spoiler:
So if this cook is on Shinichi's/Conan's level, he's going on my Rum suspect list.

Spimer wrote:Let's not forget other detectives have shown up before but were just for that case (Senma, Mogi, Oogami, Souda in episode 219).

So maybe this cook will turn out to be like them.

But that case (File 299–File 302/Episode 219) was a special event—a gathering of detectives. Other than having this new character, this case will probably be an average one. So I don't really think much of such a comparison.

It's been awhile since a Rum suspect was introduced, so I doubt it's just going to be a one-case character who's not going to be involved in the story, from then on.

Plus, there's the "Bourbon first appeared (as himself—his true first appearance was as Scar Akai, after all) as a waiter" comparison.

After the Bourbon arc, just this one detective is nothing.
“Life is infinitely stranger than anything which the mind of man could invent. We would not dare to conceive the things which are really mere commonplaces of existence. If we could fly out of that window hand in hand, hover over this great city, gently remove the roofs, and and peep in at the queer things which are going on, the strange coincidences, the plannings, the cross-purposes, the wonderful chains of events, working through generations, and leading to the most outre results, it would make all fiction with its conventionalities and foreseen conclusions most stale and unprofitable.”
“Education never ends... it is a series of lessons, with the greatest for the last.”
― Arthur Conan Doyle, The Complete Adventures of Sherlock Holmes and His Last Bow
"I have decided to stick to love... hate is too great a burden to bear."
— Martin Luther King Jr. (A Testament of Hope: The Essential Writings and Speeches of Martin Luther King, Jr)
Top

This is interesting how this new cook's appearance resembles Bourbon's first appearance. But then Gosho might just be trolling us like always.

I wonder if the cook is playing dumb. Maybe he already knew the culprit and all but just let Sleeping Kogoro handle it ? I'm just making assumptions though, in case the guy is Rum. But for me, Rum shouldn't be a character who is working in a sushi restaurant or a teacher nor someone working for the Police. Since it's Rum and the second-in-command, he should be more discreet than all of that. Just like you wouldn't see Gin outside so much, I hope it's the same with Rum.
Top

You're kidding, right? It's Gin.

Without him, there'd be no Detective Conan, to begin with... and that's just the start of it.

can I answer you here? Even if I do hate manga but I will answer on the manga thread this time only

Do you think that Gin now is so important?

If you ask me about the time from episode 1 to 425, the yes I do agree with you, however if you mean about the time after the episode 425 until now then no I do disgree with you here; and that because if he really important and the smartest one around the anime now like when he was from episode 1 to 425, then why he cannot find any single little rat spy?

Tell me why everyone are playing under his hand without find any signle case or any single single little rat spy?

About single little rat spy, I don't mean bourbon, or anyone, I mean the entire spies which always been calles as rats by the BO
may Picture
Top
Post Reply
289 posts

Users browsing this forum: No registered users and 7 guests