You see, one of the issues with having many suspects at a crime scene is making sure that they don't start to corroborate their stories. As some of the participants started to scramble for those little sheets of paper, Hattori Heizo then commanded, "Stop! Men, separate ta participants of da tour now!"

Immediately, the policemen started to move people away. People started to grumble immediately.

Link: Hey! I didn't do anything!

Kamite: Yea! Me neither! If anything, Abs. was the suspicious one!

Memesu: I think Henry Gordan is the one skulking around! Take him away instead of us!

At the mention of Henry Gordan's name, others started to loudly voice their suspicions as well.

As Henry Gordan was being separated from the rest, he shouted, "Why me? I haven't done anything wro--"

Henry Gordan's speech started to slur, and dropped unconscious on the floor. The policeman closest to him started to search his body, and found no identification card except a receipt for his last purchase, a bottle of Vodka. You see, the Black Organization didn't want anyone to talk, and someone was willing to shut up a fellow member than to see him sweat in the box.

Hattori Heizo demurred, "Well, dang. Which of ya miscreant wanna fess up now before I come fer ya?"

Henry Gordan (Vodka) is lynched! No will.

Night 2 Begins
Night 2 ends on Tuesday July 23, 2019 at 03:00 GMT +0
Day 2 begins on Tuesday July 23, 2019 at 05:00 GMT +0
If you didn't get a PM for your actions, let me know. If you didn't get a PM despite sending your APTX curse, it probably didn't work on the target (but was a successful attempt, aka not hindered by Frighten). If you didn't send in a vote or notify me that you wish to abstain from voting, you automatically voted. People, please check your abilities to ensure that you use the breadth that you have available to you.
Last edited by blurfbreg on July 23rd, 2019, 12:31 am, edited 7 times in total.

ONE BO DOWN!!
Top

So that who was my trickster was last night.
DCTP Movie Night: TBA

absu vs the rest of us? rip :mudkipmote:

All of the participants gave each other the nervous stare. No one wanted to be outed for something in case the same thing happens.

None of the participants responded to Hattori Heizo's command. "Ah well, let's get the rest separated now. Humble priest!" Heizo shouted towards the head priest of the temple. "May we use the unused Shukubo?"

(For those of you who really don't know anything about Buddhist temples, the Shukubo are places where worshippers, monks, and priests stay at the temple.)

"Of course!" The priest replied back calmly, yet resoundingly clear across the temple area.

As the policemen escorted each participant to the Shukubo, dumytru dropped suddenly on the ground. The nearby policeman searched dumytru's body and finds an access card for a nearby lab. It reads that it is for Miyano Elena.

"The negative karma is building up once again," The head priest speaks his thought without knowing it. "I pray no one disturb this karma..."

However, none of the remaining participants wanted to stay any longer than necessary. Some weren't even sure that karma even exists. But if it could help, karma be damned. Someone will die today.

dumy why you always gotta be BO when I try to be your ally?

And another one bites the dust

The Dhamma verses, line 119 (in chapter 9) by Dhammapada writes,

Few people hear the priest muttering this verse again and again as they were being escorted to the Shukubo. Few also saw Link collapse on the floor. Lying down and pale like a corpse, he kept repeating the following, "No. No. No. No. It isn't time yet. No No No No No NOOOOOOOOOOOO." As he got louder, everyone started to look in his direction. Eventually, his mouth frothed and he ceased breathing.

The policemen eventually searched Link's pockets and found a receipt for a few bottles of Rum and a lot of men and woman clothing. Gasps were heard all around in disbelief.

The same priest continued to mutter the next line to the Dhamma verses:

Soon, the participants of the tour rallied themselves against another person. Kamite feared for the worst and started to run. Halfway down the steps towards the Niomon (仁王門), he simply fell unconscious, almost as though he was suddenly sent into a drunken stupor. A nearby policeman checked on Kamite and found that he was still breathing, though somewhat ragged. The policeman searched the Kamite's pocket and found an identification card for Hattori Shizuka.

Hattori Heizo was dumbstruck for a moment that he didn't realize his wife was there. Then he calmed down knowing that Shizuka is only kept unconscious by some drug concoction. "Okay, folks. This is getting personal now. Do I have to arrest y'all to stop all da mysterious things going on around here parts?"

Just then, an officer undercover slapped a handcuff on someone. Hattori Heizo shouted, "HEY! I see no proper arrest warrant for ta handcuffs! I'm giving ya some time out! Reflect on your actions befer I take you off your other cases!"

"Yes sir!" And so an unidentified officer of the law was given a time-out for the next "two phases", whatever that means.

While some participants were sweating bullets knowing that the chief police commissioner of Osaka is personally on their tail, others are hoping that enough people may actually be gone so that they can leave here with the most prized possession of all. As the priest said, the wicked experience good fortune while it lasts. They were hoping it'll last them just long enough to leave the temple undetected.

Link (Rum) was cursed to death!
Kamite (Hattori Shizuka) was lynched!
An officer is suspended. (don't know how to fit into the story nicely)
Spoiler: Link's will
o_X

I was followed D1. Yukiko not in. APTXing mite as shogi guy today coz why not. Lastly...

Yumi's in. Have fun!
she actually isn't. maybe.

*squints at Kamite's will*
"Plotting since forever" 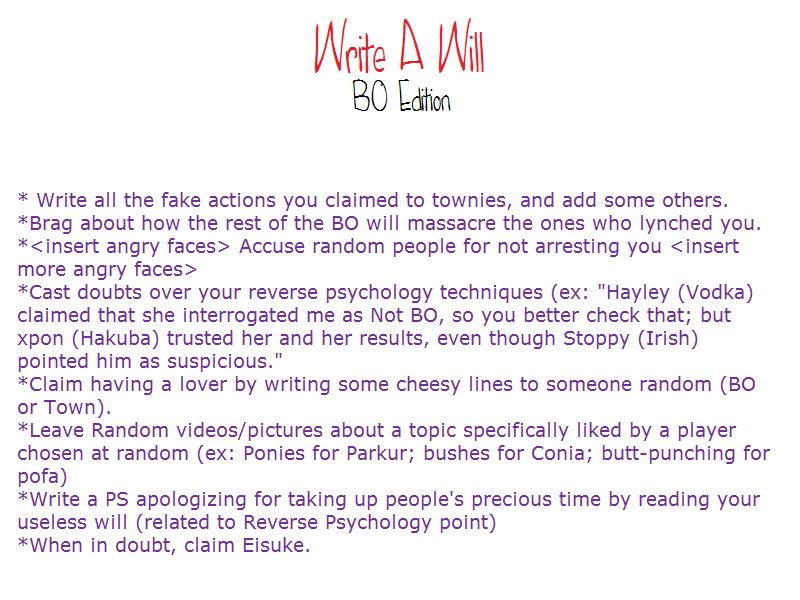 /late because I was busy until now

Also Linku why u gotta be BO

As some participants were near the Shukubo, some were groaning. Others were being unruly about it.

"Hey! Unhand me!" An oddly dressed person was shaking off the grip of two police officers.

MoonRaven was not a fan of being touched. She made that very clear to every participant during the tour in the dark basement. The stick she used to keep people away left a strong reminder on a few people's skin. The sound of that stick hitting people also left a deep mark on everyone else. Needless to say, it was a pain to accommodate her during this tour, where touching the key was the purpose of the trip.

The priest whispered once again,

So long as an evil deed has not ripened, the fool thinks it as sweet as honey. But when the evil deed ripens, the fool comes to grief.

"Someone please get these bodies to the police station now. We need ta find out what is making these people fall so quickly. Otherwise, the criminal will escape here without any of us finding him/her out!"

MoonRaven (Irish) was murdered!! No Will

Despite the chaos around him, the priest continues to meditate and chant from the Dhammapada.

He, who by good deeds covers the evil he has done, illuminates this world like the moon freed from clouds.
- Verse 173, Dhammapada

Despite not knowing any Hindu, Memesu, for some reason, realized the meaning of the phrase. Memesu tore off his clothes and rolled on the ground as though he is being burned. After a while, he suddenly shivers and holds himself in a fetal position. Eventually, he/she stops moving. On closer inspection, there appears to be a layer of latex on the skin of an unnamed FBI Henchman, revealing the skin of a woman. A single receipt was found on his/her body for a bottle of Vermouth.

Blind is the world; here only a few possess insight. Only a few, like birds escaping from the net, go to realms of bliss.

Swans fly on the path of the sun; men pass through the air by psychic powers; the wise are led away from the world after vanquishing Mara and his host.
- Verse 174 to 175, Dhammapada

Kaito Lady sensed that those around her find her suspicious and started to run for East garden of the Zenkoji temple to hide amongst the crowds. As she ran into a crowd entering the garden, none of the policemen chasing her could track the direction she headed for. As the crowds dissipated, the body of Kaito Lady was found lying down. In her pocket was a badge for Yuminaga-keibu, a leading star in the Arson Division in Tokyo Metropolitan Police Department. The policemen who ran after her and the crowd of people all suddenly dropped unconscious onto the floor as well, just as the other fallen participants had done before.

Hattori Heizo lamented, "I'm going to phone this in! We need more reinforcements!"

Meme (Vermouth-Unnamed FBI Henchman) was cursed to death!
Kaito Lady (Yuminaga-keibu) was lynched!
Spoiler: Meme's Will
akobo why do you hate me
Spoiler: Kaito Lady's Will
I write this on D2, Kamite has been sending the most suspicious PMs to ever suspiciously PM and is a lying lair who lies, if anything is to happen to me its their fault.
Night 4 Begins
Night 4 ends on Wednesday July 31, 2019 at 03:00 GMT +0
Day 4 begins on Wednesday July 31, 2019 at 05:00 GMT +0